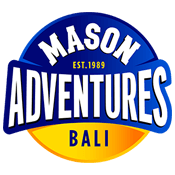 YOU MUST READ THIS!

DISCOVER THE TRUTH ABOUT:

The elephants that died! [read more]

Mason Adventures, formerly Bali Adventure Tours, was established in 1989 and is Bali’s pioneering adventure tour company. We started as the island’s original rafting company and since then have added numerous other adventure activities with the highest quality facilities and equipment, international-standard safety procedures, and without a doubt the best value to be found in Bali across the industry.

The Mason Elephant Park & Lodge rescued the first critically-endangered Sumatran elephants to Bali in 1997, and is the only dedicated Elephant Park on the island. The park includes Bali’s largest elephant herd, including numerous babies born naturally here over the years, while providing world-class facilities and has set standards on how to look after a captive elephant population. Since the beginning, the park has never condoned the use of brutal training methods, and all training is done using a system of repetition, reward, and patience. The only elephant park in Bali as a member of the South East Asian Zoos Association (SEAZA), and is the first elephant park in Asia to be accredited by the Asian Captive Elephant Standards (ACES).

WHY YOU SHOULDN’T USE A COPYCAT COMPANY
AND AVOID DISAPPOINTMENT

Copycat companies are just that, a copy of the original. It is well known that originals are usually the best. Most claim to be the same as the original, but seldom are.

Copycat companies usually use cheaper and inferior products to enable them to undercut the original and usually their facilities are built to a budget for this reason. These copycat companies often compromise safety by cutting corners and costs to save money to then offer a cheaper price.

Even though copycat companies are often cheaper, they never give the same value and service, or offer the same product. Even though they may claim to be as good in their advertising, they are never the same value as the original. Usually the cheaper price is given to agents, not the customer. This means the retail price is similar for a much lesser product.

WHAT DOES MASON ADVENTURES OFFER THAT IS SUPERIOR?

1. Mason Adventures is the only company in Indonesia using World class equipment and World standards of safety.

2. Mason Adventures uses only ‘state of the art’ safety equipment and has a fully accredited insurance rating.

3. All guides are trained to world standards in river knowledge and safety procedures.

5. Only Mason Adventures has a complete Restaurant and Bar at the finishing point, that offers a full buffet meal made fresh in our own kitchens with full waitress service. The Ubud Adventure Centre is the most modern and up-to-date rafting facility in Asia.

6. Mason Adventures offers deluxe changing rooms, hot showers and free use of towels and bags for wet clothes. Only after showering and changing do you eat in our 5-star ‘Canopy’ restaurant with its magnificent view.

WHAT DOES MASON ELEPHANT PARK OFFER THAT IS SUPERIOR?

1. It is the only dedicated Elephant Rescue PARK in Bali, with full botanical garden setting.

2. It is the only Elephant Park with complete facilities that include:

3. Our park is a member of the South East Asian Zoos Association (SEAZA), and is the first elephant park in Asia to be accredited by the Asian Captive Elephant Standards (ACES).

4. It has more elephants in residence than any other location in Bali (31) and has complete facilities for their comfort and protection, with a qualified vets on call 24 hours a day.

5. The park gives all elephants daily vitamin supplements, regular anti worm dosing and six monthly injections for diseases such as tetanus. Medical and Health Care is a major prioity.

6. Only the Mason Elephant Park at Taro is located in a climate and location chosen as the most suitable to Sumatran Elephants in Bali, the elephants are originally forest dwellers and cannot tolerate hot or dry conditions for long periods of time.

(Beware of the Pretenders)

Some companies will print brochures claiming facilities that don’t exist or standards that are not adhered to.

Some companies offer poor or unhygienic food. Many have poor control of food preparation or keep it for long periods with no refrigeration or protection from contamination. It will sometimes be prepared hours before being eaten and is often prepared in another location and transported under unhygienic conditions.

Some companies have poor safety standards and badly trained or undisciplined staff. This is often due to low wages offered or only part time employment given to many of the staff.

Many companies use rented transport that is of inferior quality and often lacks regular servicing. Air conditioning is commonly broken or not installed and brakes and stop lights are not maintained to proper International standards.

Some agents, (especially freelance), will try to trick people by sending them to an inferior company, because they receive bigger commissions. Often they will claim it is either the best company or as good as another or worse still, that it is the ONLY company when, in fact, it isn’t.

The care of animals by many companies is especially worrying as this is not a high priority in Asia as it is in the West. Tourists are often shocked or angered by these standards, however complaints to these companies usually falls on deaf ears as they are not forced to improve standards of animal care by law.

INCIDENTS / ACCIDENTS  WITH COMPANIES, NOT RELATED TO MASON ADVENTURES

It is common for accidents and incidents to be kept a secret from the public when they happen at some companies. We would like to distance our company from a couple of incidents that were not related to the Mason Elephant Park at Taro but have become worrying rumors to us.

It was not at our Park that one elephant died because the owner of the elephant would not agree to pay the veterinarian to attend the elephant for a stomach complaint. [back to top]

We are not the elephant location in Klungkung that had two elephants contracted tetanus and become very sick and almost die, due to tetanus injections not being given to save costs. [back to top]

It was not our Park that had 20 gibbons and a number of camels given to them which all consequently died due to neglect. [back to top]

It is not our Park that had an accident caused by elephants climbing over logs with guests riding on them. This accident happened to an Australian woman who received a broken shoulder and blood on her lungs when the elephant she was on fell from logs causing it to then fall down and her to fall off. She was air-evacuated to the Royal Hospital Perth because of her injuries. [back to top]

It was not our company that received 10 elephants at a dangerous location high above the Ayung River on the edge of a cliff, where two subsequently were claimed to have jumped off and killed themselves.  The companies explanation given to the local press, as to why one of these happened, was that it was ‘Possessed by a spirit’ and had nothing to do with the fact that there were no fences in place, to prevent this from occurring. [back to top]

Note: It must be remembered that, firstly, elephants can be scared by numerous things, and secondly, that elephants cannot ‘physically jump’ and dont ‘Commit Suicide’

This website uses cookies to improve your experience while you navigate through the website. Out of these, the cookies that are categorized as necessary are stored on your browser as they are essential for the working of basic functionalities of the website. We also use third-party cookies that help us analyze and understand how you use this website. These cookies will be stored in your browser only with your consent. You also have the option to opt-out of these cookies. But opting out of some of these cookies may affect your browsing experience.
Necessary Always Enabled
Necessary cookies are absolutely essential for the website to function properly. This category only includes cookies that ensures basic functionalities and security features of the website. These cookies do not store any personal information.
Non-necessary
Any cookies that may not be particularly necessary for the website to function and is used specifically to collect user personal data via analytics, ads, other embedded contents are termed as non-necessary cookies. It is mandatory to procure user consent prior to running these cookies on your website.
SAVE & ACCEPT